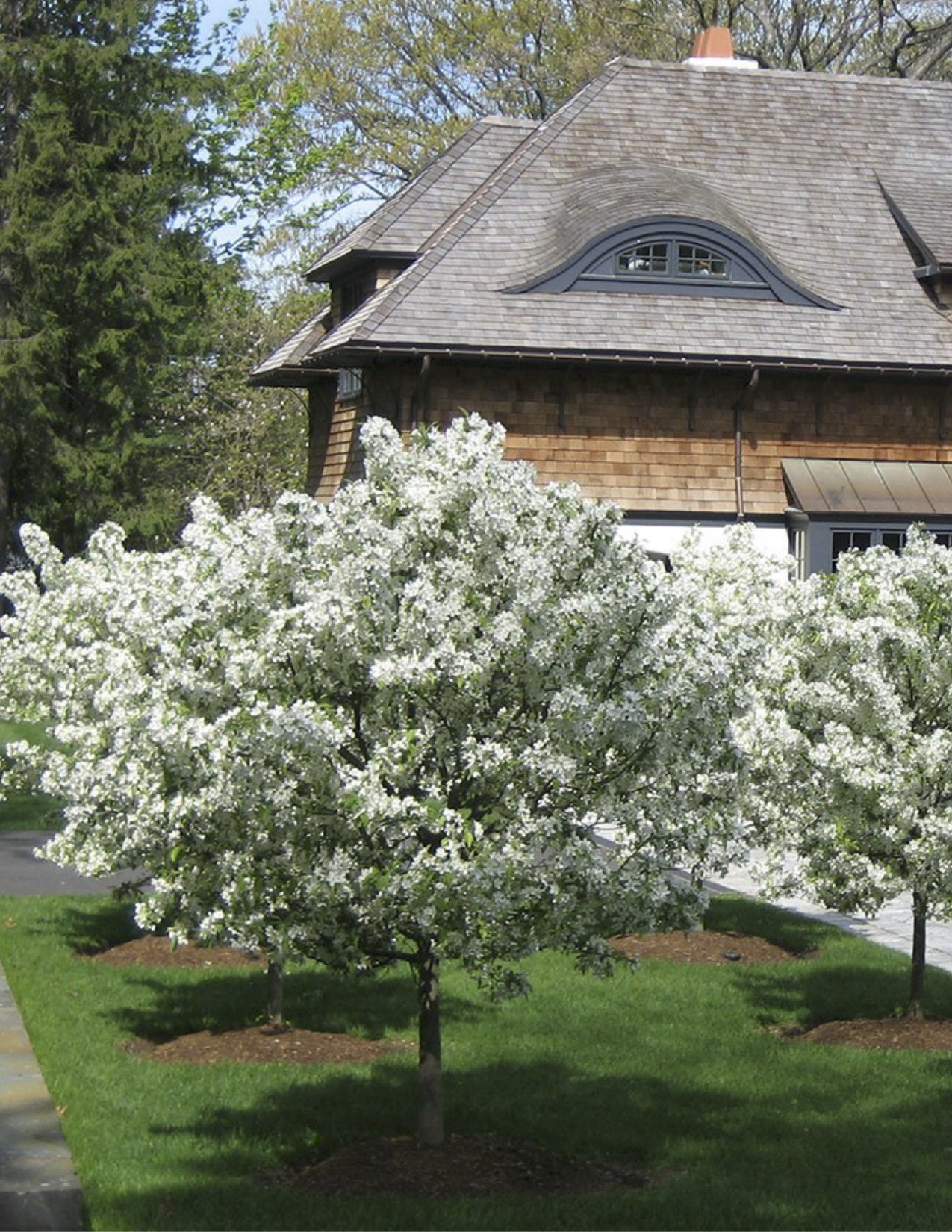 Located in a wooded neighborhood in Newton, the landscape designed for a young family reflects their creative and active spirit while providing a strong relationship to the architecture of their new arts-and-crafts style home.

The project took approximately one year to complete from design to install.

The design incorporates the client’s strong desire for large open areas for family play with a cohesive site plan that provides distinct garden rooms, including a fireplace terrace for relaxing and entertaining and a ball field. 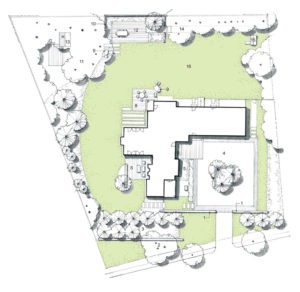 Stephanie Hubbard, SiteCreative’s founder and principal, says, “This property was once a part of a larger estate that was divided up. The previous house on the site was a run-down ranch, but interestingly enough still had one of the original estate walls intact. There is a similar wall that remains on a separate property across the street that was also a part of the original estate.” The existing historic site wall was refurbished to function as an enclosure to a new outdoor room.

On approach, the unassuming yet stately entry walls are layered. Stephanie explains, “The layering of the entry walls was intended to create some dimension in the space as seen from the street. It also engages with existing pine trees that are in a different plane than the entry walls, connecting them with the design. The walls are made from a native New England stone, worked to have an architectural feel.” 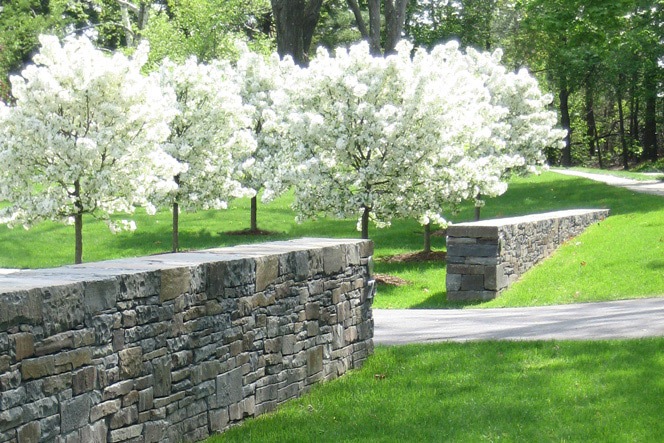 Leading up to the entry walls, preserved stands of pine trees enhance the character of the site and provide a strong connection to the surrounding Newton neighborhood. By the entry, Stephanie also incorporated one of her favorites, the Crabapple, into a grove. “It’s a great small flowering tree,” she notes, “that comes in many varieties.”

In the entry garden, near the parking court, Stephanie included inkberry, deutzia, white cranesbills and sweet woodruff. The front gardens palette is mostly whites; a flowering color palette transitions into blues and purples as you move around to the back and more casual side of the property.

The focus on function and texture is evident throughout the hardscape that balances the bold and simple plant palette. Defined areas transition easily in part due to the curved edge around the lawn panel which unites the rhododendron allée with the fall garden and a dining area. Stephanie says, “The curve is a bit more dynamic than a straight line, and really draws your eye from one space to the other.” 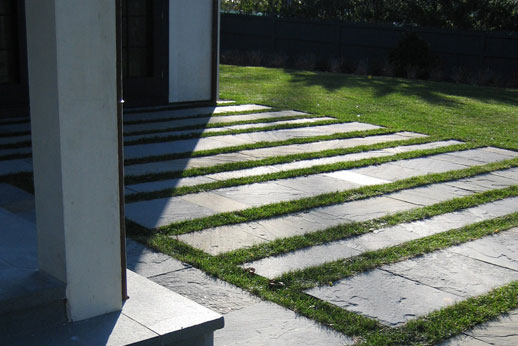 Traditional materials of the New England landscape were applied throughout the design to balance the modern lines. Stephanie says, “We salvaged the original tile wall cap and parged the stucco face to match the new house. For example, the dark wall color is a great backdrop for the fresh green and purple of the plants.”

Stephanie continues, “Boulders were excavated from the site. Some had great form, so we decided to work them into the design, bringing some unexpected elements to an otherwise clean-lined design.” The boulders also help create a sense of timelessness for the dining terrace. 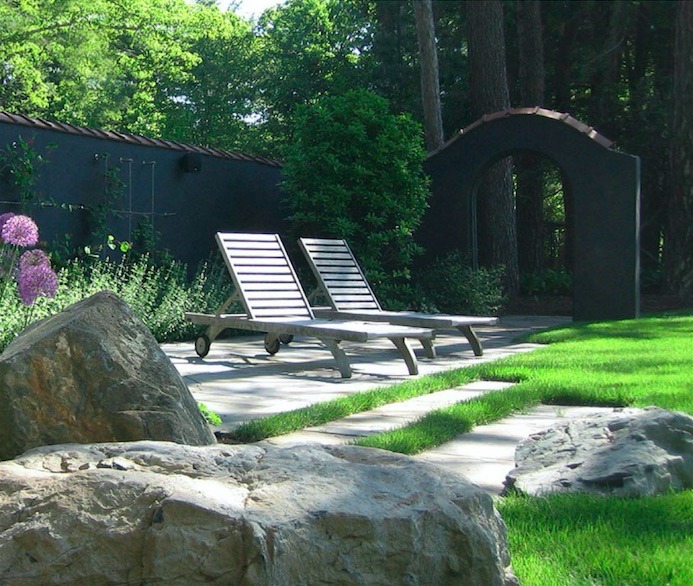 The fall garden is strong with plantings of katsura trees, offering unrivaled vibrancy during the autumn season. Fullness is delivered with fothergilla and peppered with windflower, while the New England aster provides interest in the later part of the season.

Stephanie meets the challenge of the shorter growing season with a strategy of combination saying, “We always design our planting combinations to provide four-season interest, including winter which is all about the structure of the plants. That can include the bark and branch patterning of deciduous trees, forms of evergreen plants, dormant/dried ornamental grasses and seed heads of perennials, and plants with berries for winter interest and food source for birds, such as the red berries of the crabapple trees in front.”

The winning combination provides an evolving year-round refuge and achieves the elusive freedom of an open space along with areas to nestle in seclusion. 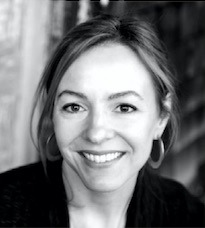 Stephanie Hubbard is the founder and principal of SiteCreative. She is a LEED-accredited professional and a registered landscape architect in Massachusetts with over 20 years of design experience with public and private landscapes. Stephanie’s passionate interest in materiality, eye for color and form, and horticultural expertise drive the focus of the SiteCreative studio.

Previous Post: « Look of the Week: Alice and Olivia Picks
Next Post: Don’t Miss Out on the Shopbop Event of the Season » 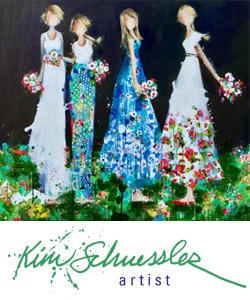 Good night sunny Sunday Funday! Hope yours was as