You are here: Home / Food + Entertaining / A Feast Fit for Dad

He’ll thank you for it!

Once again Annie Belanger and Benton Weinstock, the creative ladies of the entertaining-made-easy blog Set Sip Serve, have put together a delicious meal…this time for Father’s Day.

How To Prepare The Perfect Steak

STEP 1: Take your steak out of the refrigerator 30 minutes before you plan to prepare it. Plunking ice-cold meat onto a hot pan will get you a piece of pot roast rather than a nicely seared sirloin. Generously shower the meat with salt and pepper—shower, not sprinkle, is the key word here (come on, you’ve seen chefs do it on the Food Network, so don’t be a spice wimp. Really lay it on). Seasoning the steak beforehand means the spices will mingle with the juices of the meat as it cooks, resulting in a much fuller and satisfying flavor—so there is a method to this apparent salt-madness.

STEP 2: Preheat your pan over medium heat. A heavy-gauge pan works best because the heat will be evenly distributed over the surface without the hotspots that might scorch the meat. Pat the steak dry with paper towels and rub it all over with olive oil. This accomplishes two things: A steak with surface moisture will simply steam when it’s placed in a hot pan and the oil helps by transferring heat directly from the pan to the meat fibers (oil is a very efficient conductor of heat).

STEP 3: Now here is the part where people are going to look at you funny. Start by standing the steak on its narrow side. That’s right, you’ll probably have to hold it up with tongs, but this step renders some of the beef fat while crisping it up at the same time. Brown all the fatty sides of the steak before laying it flat. Not only will the finished steak look more appetizing, but it’s now going to cook in its own flavorful fat, a rather perfect synthesis of meat methodology if you ask me.

STEP 4: Now that the steak is laying flat, let it cook on one side for about five minutes before turning it. Remember, you’re using medium heat here and caramelization, not carbonization, is what you are after. Occasionally tilt the pan, spoon up some of the rendered beef fat and baste the meat. After the steak has cooked for a full five minutes on each side, flip it frequently, about every minute, until it’s done to your liking. Constant turning keeps the juices from congregating on the surface of the meat (juices that evaporate with an agonizing hiss as they hit the pan) and results in a juicer steak.

STEP 5: Remove the steak to a cooling or roasting rack and poise a plate beneath to catch any juices. Simply plating the meat would result in the bottom steaming in its juices as it cools, and some of that precious caramelization that you’ve taken so many steps to achieve would be lost. Let the steak rest a good 10 minutes before serving. Be sure to include any juices you’ve captured, and if deglazing a pan is in your repertoire, don’t forget the pan sauce. 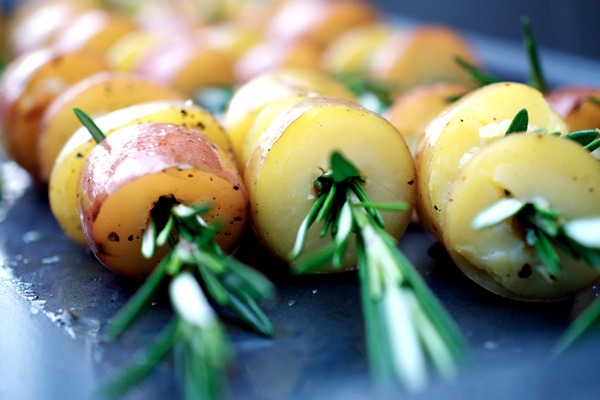 STEP 1: Cover potatoes in one inch of cold water in a 4-quart pot. Then add 1 tablespoon kosher salt and bring to a boil over high heat. Reduce heat and simmer until potatoes are just tender, 12 to 15 minutes.

STEP 2: Drain potatoes in a colander and transfer to a large shallow pan to cool quickly.

STEP 3: If using a charcoal grill, open vents on bottom of grill, then light charcoal. Charcoal fire is hot when you can hold your hand 5 inches above rack for 1 to 2 seconds. If using a gas grill, preheat burners on high, covered, 10 minutes, then reduce heat to moderately high.

STEP 4: Meanwhile, toss potatoes with 1 tablespoon oil and remaining teaspoon kosher salt, then push 2 or 3 potatoes onto each rosemary stem.

STEP 6: Transfer potatoes to a platter and drizzle with remaining 2 tablespoons oil. 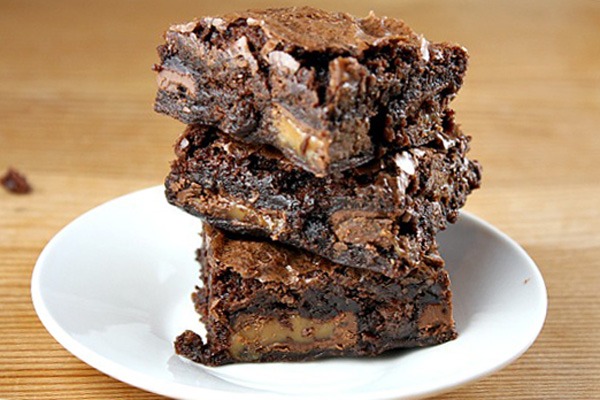 Recipes and photos from LuluPowers.com